Courgette carbonara, and other egg-based adventures

On Friday, following a St Patrick’s Day on which I perhaps enjoyed a cider too many than was strictly wise (in my defence, they were WHISKY CASK. Whisky and cider – why, your man Patrick himself could scarcely have resisted), I was in serious need of some vegetarian comfort food. A big bowl of mash, which would have fitted the bill nicely, was too dull to justify, so, after happening upon a beautiful blog post on the subject whilst in search of granita advice at work, I decided on pasta carbonara. (This is my new favourite blog, by the way. It is all sorts of wonderful.) Clearly the guanciale (unsmoked pig jowl bacon, apparently) was off limits, but an old favourite, courgette, could step into the breach, and allow me to put her advice to the test – too often, my carbonara ends up rather like egg-fried pasta.

Usually I make it with lemon zest and pine nuts, but as this blog is all about a challenge, I decided to follow the recipe that the wonderful Rachel had helpfully posted a few years before, softening chopped red onion and wilting strips of courgette in plenty of olive oil, and then beating together a whole egg with pecorino and Parmesan (Rachel likes to use a mixture, as I do in my pesto) and then tipping the drained pasta, along with a ladleful of the cooking water, into the pan, and – the moment of truth – sticking the egg and cheese mixture in and ‘stirring gently but firmly’ until the sauce thickened. (There was meant to be torn basil in there too, but it slipped my befuddled mind on the way home.) Although I skipped the zest, I did use some Carluccio’s lemon pasta I’d been hoarding for months (I don’t even think they make it any more) and for once, the whole thing went right: silky and rich, rather than claggy or watery. A triumph. I made too much, and ate the lot. The lighting of this picture really doesn’t do it justice: 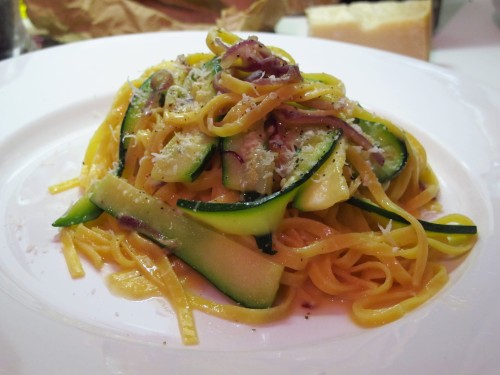 After running off a smidgen of the above the following morning, I devoured an immense English muffin I’d purchased at the South Bank cheese and wine festival while in search of a hangover-beating cheese toastie, with a lovely poached egg. It was pretty good, but a muffin of such proud proportions could have done with a hefty dollop of hollandaise to mop up. It felt a bit wasted on a single egg.

Saturday night, I had an even bigger challenge; dinner at a local Sardinian restaurant. While all around me tucked into red mullet bottarga and spicy sausages, I had an aubergine and rocket pizza, spaghetti with pesto, or culurgiones, a dish I’d never heard of, to choose from. Obviously, I went for the last one; a sort of dumpling/ravioli cross stuffed with potato, mint and salty pecorino, and served with a tomato sauce. It was good – although not as good as the squid opposite looked.

Having scuttled to the farmers’ market on a post-muffin high, I have wild garlic (something I balk at paying a pound a bag for, until I remember all the things I’ll have time to do with it without tracking some down for myself), purple sprouting broccoli and red kale to play with. The first two are old favourites, the last a new one on me; not quite sure what I’ll do with it yet. I scrambled some eggs with the wild garlic for Sunday lunch, served with some Pugliese bread made by the muffin people. It always saddens me how little scrambled egg a couple of eggs make. (Is that greedy?) 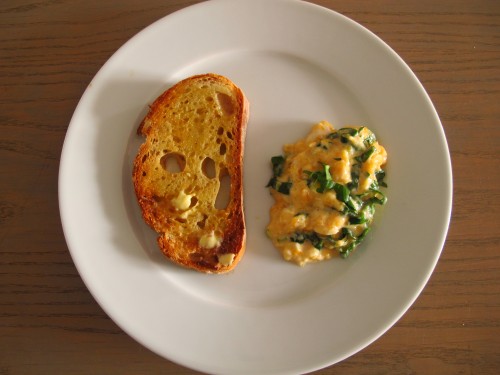 I was pretty excited about dinner this evening, with the fridge bursting with so much possibility. As I wanted to make something which I could wrap up for lunch during the week, I’d already decided on a wild garlic frittata but then, flicking through Ottolenghi’s Plenty, I happened upon his smoky version which, by fortuitous coincidence, contained a new ingredient I’d forgotten about – the scamorza affumicata I’d given into at the cheese market, after assuring Sharon I was just coming to keep her company. Although I’m a sucker for all things smoked, I’d always found myself vaguely disappointed by this mozarella-like cheese which seemed to be everywhere the summer we were in Italy – it lacked the saltiness to make it truly satisfying.

I’m glad I gave in afresh. This is the best thing I’ve made so far. I substituted the cauliflower for purple sprouting broccoli, which I blanched, dried, and fried briefly in olive oil, before adding egg (I liked the difference in colour between organic eggs and Clarence Court Old Cotswold Legbar yolks):

smoked paprika, Dijon mustard, chopped chives and wild garlic, cream and vast amounts of grated scamorza and Gruyère (it should have been crème fraîche and Cheddar, but needs must), cooked the whole lot briefly on the hob, and then stuck it in the oven until set, with a handful more of grated cheese:

If I’d been serving it immediately, I would have left the centre a little runny, but the idea of taking liquid egg into work three days in a row was somewhat alarming, even to my cavalier health sensibilities, so I cooked it right through. In the end, however, I realised that, given the thing is about 98 per cent delicious stringy cheese, it probably would have made little difference. Although paprika-pink egg is vaguely unsettling, this is a real knock-out of a recipe – even my flatmate’s merry boyfriend, fresh from a slow-cooked shoulder of pork (aaaahhhh) down in Shoreditch, pronounced it a success, and he claims he’s pretty fussy when he’s drunk.

And no, I don’t know why I ate so many eggs this weekend. Possibly thanks to a lecture from my mum on the subject of protein, or more probably, just because I drank too much.

5 responses to “Courgette carbonara, and other egg-based adventures”