The weekend before last, we went to a wedding in Suffolk. (The exceptionally fine wedding cake is shown above, in a state of somewhat debauched disarray.) Thanks to rather a lot of rioja, it was necessary, that fine September Sunday, to walk two and a half hours to collect the car. It was sort of worth it though, because of the bounty of autumnal fruit in the hedgerows. Blackberries, obviously (every year I forget that the big juicy ones are always rubbish – go for the tight, pinched looking ones…)

Sloes, rosehips, damsons, and, most excitingly of all, because I wasn’t quite sure of myself when pointing them out, wet walnuts (obviously – fresh from the tree):

There were also some cute wee apples, which turned out to be utterly, inedibly sour (although, I think, not small enough to qualify as any sort of crab):

(Actually, I’m still gorging myself on the much more palatable apples brought back from Richard’s parents’ very enviable orchard at the beginning of the month:

…although sadly the plums and the pears are long gone.) 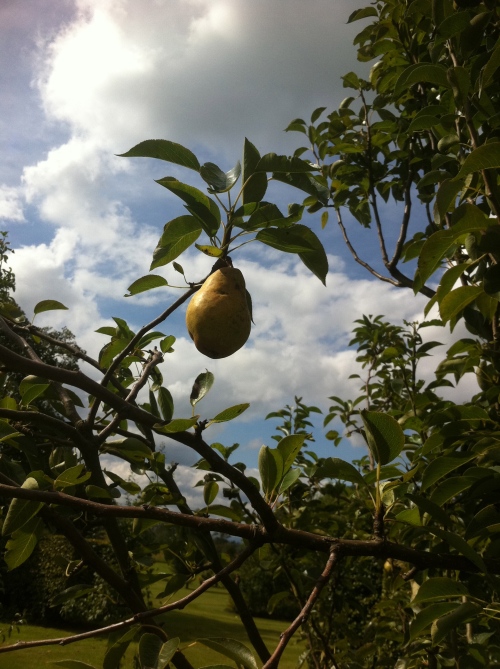 Anyway, that was another weekend, another wedding. When we finally got back to London, with half a dozen squashed damsons and a couple of slightly frayed tempers, it was to find a foraged feast waiting, courtesy of some rather more diligent hunter gatherers. Alex and Jon presented us with a Sophie Grigson-inspired cobnut pilaff (cobnuts are always one of those things I intend to buy, and then never get around to cooking. Time is running out, so I’m glad I scoffed two helpings of this): 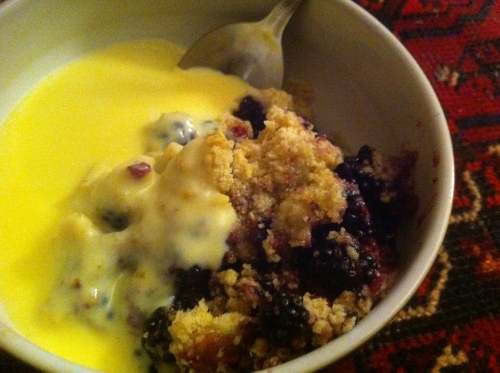 Last weekend was also East Anglian – north Norfolk this time. We held a Come Dine With Me competition on the Saturday night (yeah, I know how to live), complicated by some rather tricksy restrictions. First of all, no gluten or dairy. Or, not much at least. Secondly (and more importantly as far as I’m concerned), no anchovies or cauliflower – once I realised Alex didn’t like them, they were all I could think about. And lastly, everything had to go with a great big bottle of Dead Arm Shiraz a kind soul had brought us for our birthday in June… easy enough for the main course, less attractive for a starter, especially with no cheese allowed.

With no time to make a terrine, and no smoked meat in evidence in the village (a place so very down-to-earth it was easier to find gluten-free amaretti than pears), I was tearing my hair out, until I happened upon two mysteriously premature partridge in the butchers. Defrosted or not, they made an excellent salad with some watercress, garnished with local apples and walnuts caramelised in even more local honey, and tossed with a cider vinaigrette.

Alex had an easier ride with the main course, opting for roast lamb with rosemary, served with roasted garlic and a beetroot and horseradish bake. I’m not mad keen on beetroot without vinegar (you can take a girl out of the 80s…) but, with the intensely savoury lamb, it was rather nice. Not as nice as potato would have been though, obviously. 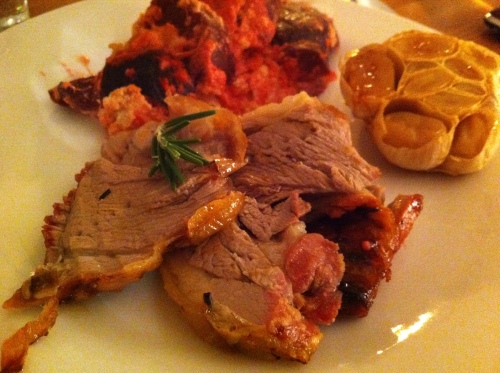 And Richard made some chestnut-flour brownies, according to a David Leibowitz recipe. For some reason, possibly the gas oven, possibly the vegan marge, they didn’t quite solidify. But they were very tasty in any case. Even tastier when I won. (Actually, Alex and I drew, but I scraped ahead by virtue of my beetroot-related stoicism. So, basically, I won.

After that, how could mere fish and chips hope to compete?

One response to “Mellow fruitfulness…”