A couple of weeks ago, I went skiing. Well, more accurately, I went to Megève, fell over a few times, and then overcompensated with cheese. By God, they do cheese well up there. It’s definitely worth a couple of facefuls of powder (the cold kind), and all those mysterious bruises which serve as the longer-term memories of happy times on the slopes. (What a journey of discovery they make every trip to the shower.)

Anyway, before I went, I finally cracked and downloaded Hipstamatic, on the strength of an excellent article in this month’s Jamie magazine on food photography with phones. I’m still getting to grips with the angle though, as you might be able to tell.

Getting a 6am flight is definitely rewarded if this is the sight that greets you at the top of the mountain: tartiflette with cured ham and one of those simple green salads the French still kick our arses at. The nice bit about this was that Richard left me all the gooey cheese from the top. He is a great person to share food with. 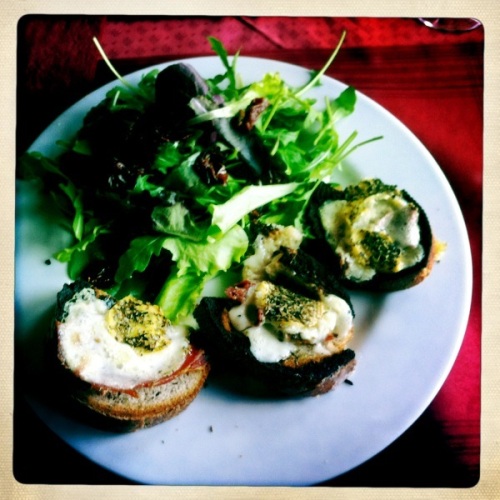 The next day, we ventured further afield, to a restaurant you actually had to ski to. Admittedly, even I could make it down there in four minutes. I made a bad choice here. Raclette toasts (with typically unannounced ham concealed beneath – take that, les végétariens!). Good salad (although sun-dried tomatoes were an unwelcome taste of the nineties) but I should have had the Savoyarde omelette with ham, cheese and potato. I definitely would have skied better that afternoon. 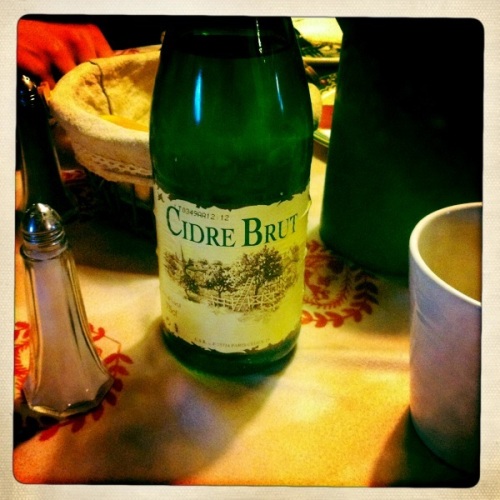 Still, the next day’s lunch at the Alsatian La Raviere made up for it – even though the snow was so deep I fell over 72 times on the way. Sticking my snood on the stove and downing some of this cider steadied my frozen nerves somewhat, ready for the most incredibly gooey cheese tart I have ever eaten, a very serviceable onion version, charcuterie and cornichons galore, and this magnificent smoked sausage, served with rosti. They gave us an extra sausage by mistake, but no one could quite face putting it into their trouser pocket for the way home.

Which proved to be a bit unfortunate, because someone lost his ski, and then, thanks to an overabundance of snow, they closed the lifts, and we were left stranded. That sausage would actually have come in pretty handy. This is the view from the restaurant porch, where we enjoyed our digestif schnapps, unaware of the horror that lay ahead. It’s pretty snowy, as you can see.

The best tartiflette of the trip was at Les Mandarines on the last day – washed down with a crisp Campari. (Odd, and yet definitely satisfying combination.) I particularly liked the entire rind melted into the top, and the fact they’d used cream, which took it into dauphinoise territory. Cheesy, bacony dauphinoise. The dauphinoise from heaven.

And then, of course, the raclette proper. I’m not familiar with this style, where you heat individual pieces of cheese on a little shovel – we got the wrong end of the stick initially and put them on top of the heat, as in the photo, until the waiter came and told us off. Apparently they go underneath. Who knows what the top bit’s for.

Mmmm… cheese. No wonder we had a nice M&S edamame on the train home that evening. 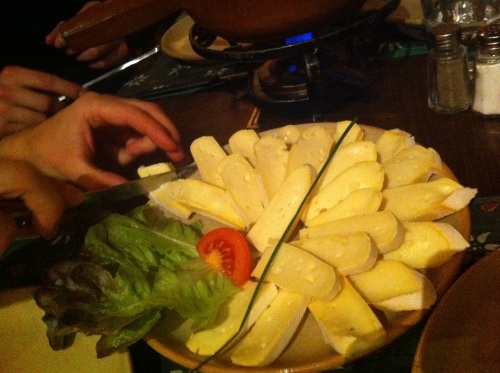